Fishtank Plus for ELA

Some of the links below are Amazon affiliate links. This means that if you click and make a purchase, we receive a small portion of the proceeds, which supports our non-profit mission.

These assessments accompany this unit to help gauge student understanding of key unit content and skills.

Additional progress monitoring suggestions are included throughout the unit. Essential Tasks can be found in the following lessons:

Suggestions for how to prepare to teach this unit

To learn more about how to prepare a unit, internalize a lesson, and understand the different components of a Fishtank ELA lesson, visit our Preparing to Teach Fishtank ELA Teacher Tool.

The central thematic questions addressed in the unit or across units

Literary terms, text-based vocabulary, idioms and word parts to be taught with the text

To see all the vocabulary for Unit 4, view our 3rd Grade Vocabulary Glossary.

In order to ensure that all students are able to access the texts and tasks in this unit, it is incredibly important to intellectually prepare to teach the unit prior to launching the unit. Use the intellectual preparation protocol and the Unit Launch to determine which support students will need. To learn more, visit the Supporting all Students teacher tool.

Notes to help teachers prepare for this specific unit

Teaching with a critical lens requires respectful consideration of the political and historical implications of language when centering the experiences of various groups. The terms Indigenous, American Indian or Native American are all correct, depending on whom you ask. In fact, the terms are used interchangeably by the federal, state, and tribal governments.

For the purposes of teaching, when learning about a specific tribe or nation, the specific name of the nation will be used. This unit uses the terms Indigenous, Native peoples, and Native Americans when referring to the collective group of those groups who originally inhabited and cared for the land which we now call the Americas.

This unit focuses on the experiences of Indigenous and Native peoples of the United States in the past and present. After first being introduced by Christopher Columbus, the term ‘Indians’ was commonly used to refer to the Native peoples of the Americas and remained in use well into the 1970s. For that reason, it appears in many texts in this unit. Due to this connection,  the word Indian by itself is sometimes regarded as offensive and we encourage you to discuss the history with students when it comes up in texts while providing alternatives terms and the reason why we use those alternatives.

While some people have reclaimed “Indian” and identify themselves as such, for our purposes we will refer to specific tribes or nations (i.e. Blackfoot, Cherokee, Haudenosaunee, etc.) whenever possible.  Native people often have individual preferences on terms, therefore, the best way to determine which terms a group or person prefers is to ask them. This will be especially important when researching different Native groups.

Other terms that students may see are Inuit, Yup’ik, and Aleut Peoples who live in the Arctic and see themselves as culturally different than Native people from the United States. In Canada, the terms First Nations, First Peoples, or Aboriginal are also used.

Through this we are engaging in the necessary practice of bringing about not just social or educational justice, but language justice for those who have historically been oppressed by our mislabeling and misidentification.

For additional information about the use of words and terminology, read:

Explain two to three things the author wants the reader to know and understand about the People.

Explain how the arrival of European explorers and settlers impacted Indigenous people.

Explain how the settlers impacted Indigenous people, culture, and society.

Explain what the People realized at the end of the story and what they told others.

Elaborate by adding important details to prove a point.

The People Shall Continue — entire text

Analyze and explain the author’s purpose for writing The People Shall Continue.

Research an Indigenous nation or tribe in your area. Create a report that shows how the Indigenous population has changed over time.

Explain what information the author wants readers to understand about Indigenous language and why it is important.

Explain what messages Chester received about speaking Navajo and why the messages changed.

Explain why the Navajo Code Talkers were vital to the war.

Explain why being a Code Talker required both intelligence and bravery.

Explain why it is important to honor and remember the Navajo Code Talkers.

Explain why Wilma was motivated to make her community a better place.

Describe why Wilma Mankiller was a hero.

Discuss why Wilma Mankiller is considered an Indigenous hero and how she has changed the world.

Create a presentation about a recent Indigenous hero.

L.3.1 — Demonstrate command of the conventions of standard English grammar and usage when writing or speaking.

L.3.2 — Demonstrate command of the conventions of standard English capitalization, punctuation, and spelling when writing.

L.3.6 — Acquire and use accurately grade-appropriate conversational, general academic, and domain-specific words and phrases, including those that signal spatial and temporal relationships (e.g., After dinner that night we went looking for them).

RI.3.2 — Determine the main idea of a text; recount the key details and explain how they support the main idea.

RI.3.3 — Describe the relationship between a series of historical events, scientific ideas or concepts, or steps in technical procedures in a text, using language that pertains to time, sequence, and cause/effect.

RI.3.6 — Distinguish their own point of view from that of the author of a text.

RI.3.7 — Use information gained from illustrations (e.g., maps, photographs) and the words in a text to demonstrate understanding of the text (e.g., where, when, why, and how key events occur).

RI.3.9 — Compare and contrast the most important points and key details presented in two texts on the same topic.

SL.3.1 — Engage effectively in a range of collaborative discussions (one-on-one, in groups, and teacher-led) with diverse partners on grade 3 topics and texts, building on others' ideas and expressing their own clearly.

SL.3.1.c — Ask questions to check understanding of information presented, stay on topic, and link their comments to the remarks of others.

SL.3.1.d — Explain their own ideas and understanding in light of the discussion.

W.3.2.a — Introduce a topic and group related information together; include illustrations when useful to aiding comprehension.

W.3.2.b — Develop the topic with facts, definitions, and details.

W.3.2.c — Use linking words and phrases (e.g., also, another, and, more, but) to connect ideas within categories of information.

L.3.4 — Determine or clarify the meaning of unknown and multiple-meaning word and phrases based on grade 3 reading and content, choosing flexibly from a range of strategies.

RF.3.4 — Read with sufficient accuracy and fluency to support comprehension.

RI.3.1 — Ask and answer questions to demonstrate understanding of a text, referring explicitly to the text as the basis for the answers.

RI.3.4 — Determine the meaning of general academic and domain-specific words and phrases in a text relevant to a grade 3 topic or subject area.

RI.3.10 — By the end of the year, read and comprehend informational texts, including history/social studies, science, and technical texts, at the high end of the grades 2—3 text complexity band independently and proficiently.

SL.3.1.a — Come to discussions prepared, having read or studied required material; explicitly draw on that preparation and other information known about the topic to explore ideas under discussion.

SL.3.1.b — Follow agreed-upon rules for discussions (e.g., gaining the floor in respectful ways, listening to others with care, speaking one at a time about the topics and texts under discussion).

SL.3.2 — Determine the main ideas and supporting details of a text read aloud or information presented in diverse media and formats, including visually, quantitatively, and orally.

SL.3.3 — Ask and answer questions about information from a speaker, offering appropriate elaboration and detail.

SL.3.4 — Report on a topic or text, tell a story, or recount an experience with appropriate facts and relevant, descriptive details, speaking clearly at an understandable pace.

SL.3.5 — Create engaging audio recordings of stories or poems that demonstrate fluid reading at an understandable pace; add visual displays when appropriate to emphasize or enhance certain facts or details.

SL.3.6 — Speak in complete sentences when appropriate to task and situation in order to provide requested detail or clarification.

W.3.4 — With guidance and support from adults, produce writing in which the development and organization are appropriate to task and purpose. (Grade-specific expectations for writing types are defined in standards 1—3 above.)

W.3.5 — With guidance and support from peers and adults, develop and strengthen writing as needed by planning, revising, and editing.

W.3.6 — With guidance and support from adults, use technology to produce and publish writing (using keyboarding skills) as well as to interact and collaborate with others.

W.3.10 — Write routinely over extended time frames (time for research, reflection, and revision) and shorter time frames (a single sitting or a day or two) for a range of discipline-specific tasks, purposes, and audiences. 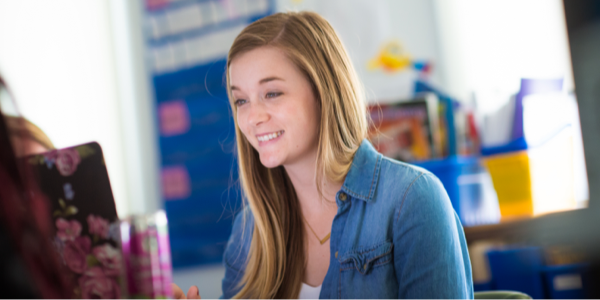 Dive in with ELA Summer Workshops

Join us in July and August!